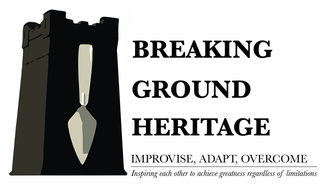 Examining mud, blood and the green fields beyond: Ex Joan of Arc 2017

The fieldwork in Bullecourt, which BGH facilitated for Op Nightingale under the banner of ‘Exercise Joan of Arc,’ really highlighted the importance of a good project design, a robust desktop and non-intrusive assessment, and having patience. The project was conceived back in 2014 and, since then, the team has conducted complex negotiations with the French landowners, museums and archaeological authorities including the regional archaeological service DRAC, to ensure safe procedure, and successful archaeology.

From 3 to 11 June, armed with trench maps, air photographs and geophysical surveys undertaken by Cranfield Forensics Institute, our team of archaeologists and veterans started their search for the final resting place of the nine tanks destroyed in the first battle of Bullecourt on 11 April 1917. In particular, we searched for the remains of Tank 796 (D23) commanded by 2nd Lieutenant Skinner which reached the edges of Bullecourt village before its gearbox failed and it was subsequently destroyed.

The DRAC had given permission for the team to excavate a 5x5m trench in a pasture field which most contemporary maps suggested was the location for the destroyed tank (subsequently used as a German machine gun position). The fieldwork did not disappoint. Under the supervision of Alex Sotheran, the excavation yielded German ‘elephant iron’ used in troop shelters, a great deal of ordnance, other trench architecture materiel, and components relating to the tank.

A large piece of the right track – which included a track ‘grouser’ – was unearthed. This cleaned to such a high level that the original paint scheme colour was visible; not a drab brown but instead a dark green. A link of the drive chain was also found as were other elements of heavy metallic objects which may be armoured. Two 6 pounder shells – the main ammunition used by such a ‘male’ tank – were located too. We had thus pinpointed the vehicle and can thus say that the main goal of the project’s first season has been a resounding success. The programme was also laden with pathos as the excavations also uncovered the remains of two German soldiers who fell close to the tank, and who were lay undiscovered in a shell crater for 100 years. They will now receive a proper burial with their comrades.

The team was located in Arras – the heart of the battles of April 1917 – and was therefore able to enjoy this beautiful city, as well as visiting elements associated with this particular part of the conflict such as the Wellington Caves. We were also profoundly moved by the kindness of the villagers of Bullecourt in their warmth of welcome and assistance with the project – in particular the Mayor, Mme Gladys Dickson, and the farmer Mnr Didier Guerle.

This excavation has been a surreal experience to say the least. Excavating a German fortified position that withstood the best of what the Allied forces could throw at it in 1917 has certainly evoked a mixture of emotions. The team, a mixture of serving and veteran soldiers, battle hardened from more recent conflicts, have travelled from far and wide with the aim of telling the story of Bullecourt.

Our preliminary findings have already far exceeded what we recovered last year on this site. No mean feat I can assure you! We have finally found the location of Lt Skinners Mk II Male Tank 796. The debris scatter from 796 is quite extensive and has confirmed our initial hypothesis that the tank would have been the subject of an Allied artillery bombardment, more than likely to dislodge enemy troops using it as an observation point.

The long held theory that Tank 796 was used as a German machine gun position after it’s abandonment has now come under scrutiny by the machine gunners in the team. Such an obvious position would attract too much Allied attention and would be death warrant for any who dare brave it. It would however make an excellent observation point for arterially observers.

We are just starting to get down to the trample layers of the Hindenburg line. What we are finding is the typical trench furniture that we would expect to find. Communications / electrical wire, expanding metal wire that would have been used to hold the earth walls back, corrugated Iron sheeting (almost like a Chatham Arch structure for you older and bolder readers) alongside the wooden structures that held it in place.

Personal artefacts from the Great War always evoke a strong response from those who find them. This excavation has been no different. Finding clasp knifes, respirators, webbing buckles, buttons, small arms ammunition and Mills bombs is like having the final winning lottery number revealed on your ticket. These artefacts or possessions are directly relatable to the team as its all items that they would have used and trained with during their military careers. It makes it even more poignant when the realisation dawns that the last living soul that touched this item probably lost their life in such tragic circumstances.

Death and suffering are all around us here in the fields of Bullecourt, however, we are also finding signs of life amongst this strife. Beer bottles, water cans, a bicycle, a beautiful mother of pearl decorated knife, kitchen implements and various other domestic items. Such simple items can make all the difference when trying to forget the daily grind of life in combat, I can certainly attest to that.

The great thing about looking for tanks in the Arras region of France is that the gold standard is not more than a short trip away from us. The Deborah is the only First World War tank recovered from a battlefield and even though she is a Mk IV Female, she still provides us with an excellent reference collection to test our parts against. It was therefore a no brainer for us to pay her a visit in her new resting place in Flesquières under the guise of “work”.

I must at this point stress the importance of having qualified EOD / UXO professionals working on site when doing anything that might have even the remotest chance of revealing ordinance. We are fortunate to have two amazingly talented specialists on site with us. Both donating their time for the good of the project. It’s also equally important to pay the same due diligence when working in the UK too. For this we also have a team of specialist EOD operators and ensure that a thorough EOD Risk assessment has been conducted prior to any work being undertaken. 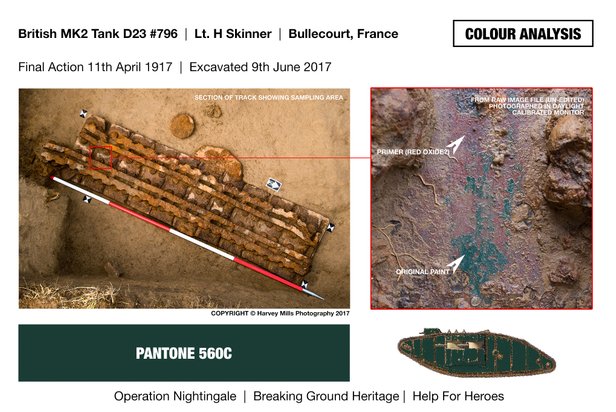 Returning to the trenches 2018

Last year we found the mortal remains of two German soldiers in what we thought was a trench. Further investigations into this location suggested that this was in fact a large shell crater. This year the shell crater also revealed the remains of a further individual, badly damaged by shell fire and alas, unidentifiable.

Just like last year, once this lost Brother in Arms was revealed, an honour guard of veterans and soldiers stood over him to pay respects and ensure that he was not left alone or lost again. For Two nights, Breaking Ground Heritage stood guard and after this brave soldier was recovered, we conducted a small ceremony to pay our respects. This was even more poignant for us as it was led by Jan, a veteran of the German Airforce who delivered a very moving and heart felt speech about reconciliation and working together.

This short ceremony was important to BGH. These mortal remains become entwined in each of our individual narratives. We take possession of these soldiers. Last remembrance Sunday I found myself toasting not just ‘Absent friends’ as I do every year, I also included ‘those that have been lost but are never forgotten’. This statement is one that I will no doubt carry forward until my final toast.

Unfortunately, these German soldiers will never be buried with their comrades, they will never even be given an EIN UNBEKANNTER DEUTSCHER SOLDAT grave marker. They will simply be placed in a communal grave in a far corner of France. This is why we go to the lengths that we do to ensure that whilst they are in our custody, they will be treated with the same dignity and respect that we would show one of our own in Afghanistan.

As with any area contested by soldiers in the Great War, evidence in the way of ordinance was in abundance. Our EOD specialists Dave and Flo were certainly kept busy dealing with all manner of munitions from grenades to 8 inch shells and lots of stuff in between. With wind flags located around the site as a precaution against a ruptured gas shell, participants soon became well versed in checking the wind direction before leaving the area on the command “Out of the trench.” This is standard procedure whilst the ordinance is being dealt with and a secretly welcome break for some I suspect.

Finds were coming out thick and fast from day one and we had no shortage of volunteers to conduct this work. Finds processing on any site is an interesting and rewarding task. Add military artefacts to this and then ask a soldier to have a look they revert to being that young child at Christmas once again. Some of the finds that were recovered were exciting, buttons, bullets, buckles etc. Some were amazing including identifiable engine parts from Lt Skinners tank such as cogs and name plates. And some were just incredible like a soldier’s knife that had its handle decorated with mother of pearl or a tap from the oil tank that lubricated the drive chain of the tank. It is thought that there are only 3 left in existence of this particular version, one being this tap.

This project has been an emotional rollercoaster for some, thought provoking and reflective for most and thoroughly exhausting for all. We brought together a group of like-minded veterans and soldiers and left with a true Band of Brothers. Each and every one of them I am proud to call my friend.

This project has brought together civilians, veterans and serving personnel from a multitude of different nations. It has forged a band of brothers; English, Scottish, Welsh, French, German, Australian and Belgian. Most of us suffer the legacy of trauma whether physical, psychological or both. We have all been brought together through archaeology and our combined heritage, with the desire to tell the story of this long past and very much unknown battle. We have come together to show unity in this climate of political unrest and to reengage with this narrative from the perspective of a new generation that has also been scarred by war.

We have been privileged to have the support of Wessex Archaeology and Cranfield Forensic institute on this year’s project, we have also benefited immensely from the great work of Mike Bennett, a Volunteer guide at Bovington Tank Museum. Without the support of these organisations this project would have not been possible so thank you for stepping up to the mark and supporting our veterans.

Inspiring each other to achieve greatness regardless of limitations

"BGH provides a unique experience in a supportive environment. You could see the change in some after only a few days. Testament to the power of mutual respect and camaraderie!"

"This is one of the best things I've ever done" 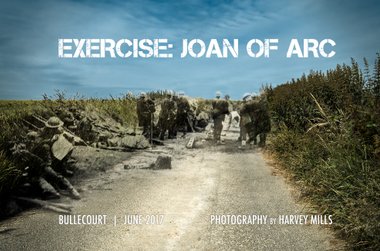 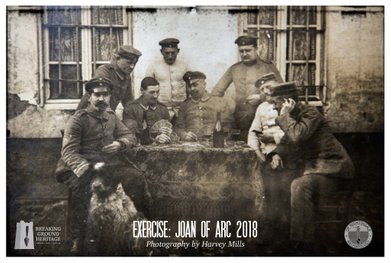 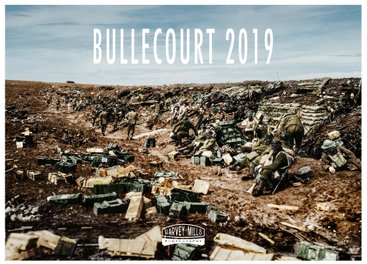 Section Of British MKII Tank Track by harveymillsphoto on Sketchfab